»THE CREATIV(E) STRUCTUR(E) IS THE FUNDAMENT OF OUR DESIGN PHILOSOPHY ‚FORM FOLLOWS CONTENT‘, IT IS METHOD, NAVIGATIONAL SYSTEM, AND CURRICULUM AT THE SAME TIME. IT HELPS TO ORCHESTRATE ALL CREATIVE INSTRUMENTS IN ORDER TO ACHIEVE A ‚GESAMTKUNSTWERK‘, A HOLISTIC PIECE OF ART.« ©URB

… a navigational system that allows to navigate through the challenging process of conceptioneering, designing and realization of ambitious projects in an innovative way.

… a creative method to become and stay creative; it helps to unveil individual creative potentials according to the credo „form follows content“.

… organized in creative phases, structuring a project in different design steps which functions like a checklist and issues that helps organizing a fruitful genesis of projects to coordinate input and output.
©URB 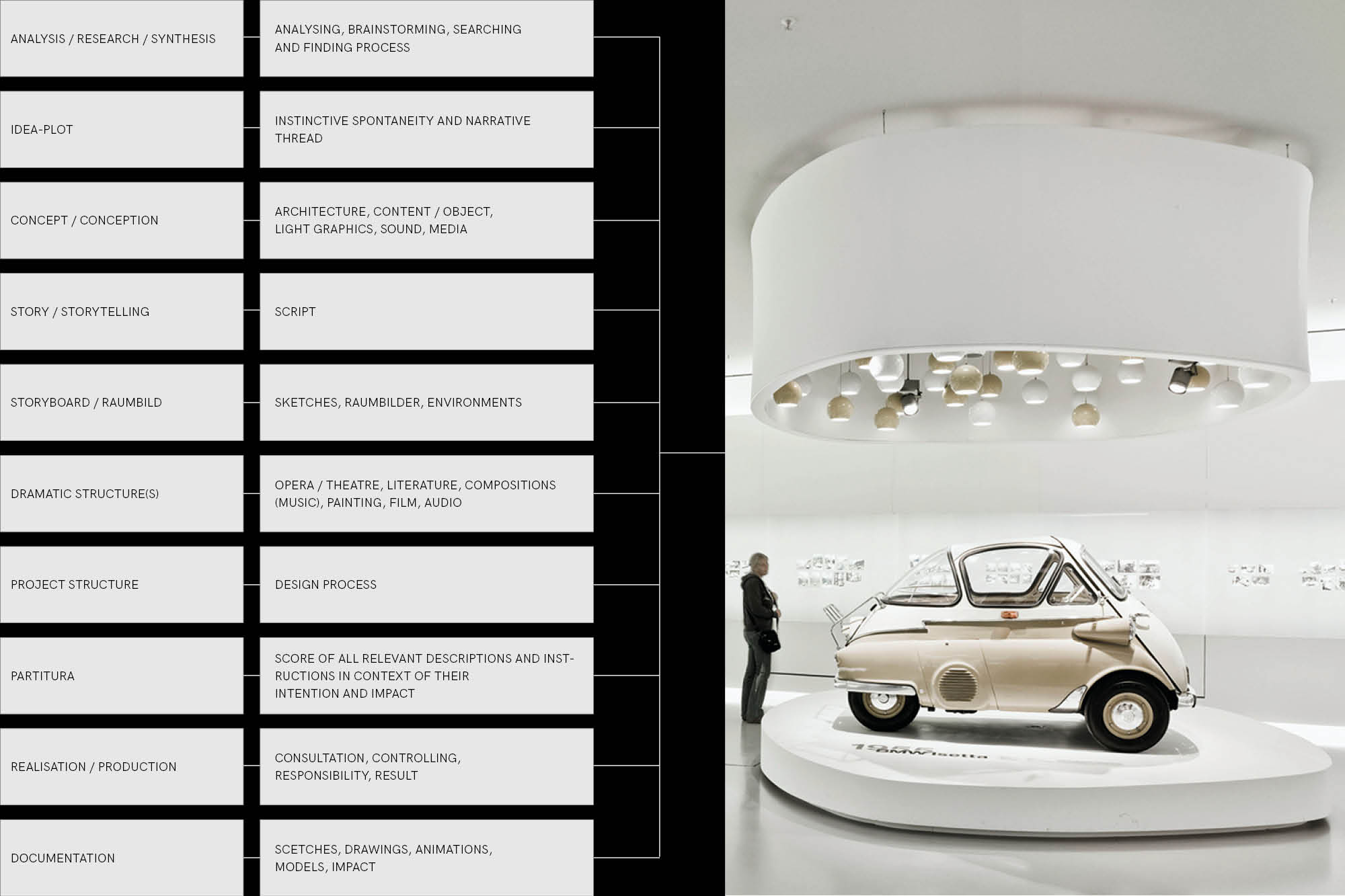 Scenography integrates and makes use of five fundamental DESIGN PARAMETERS: CONTENT, OBJECT, SPACE, RECIPIENT and DRAMATURGY. They form the basis of and the starting point for any development of holistic concepts and designs. The aim is to bring them together in a meaningful relationship and translate them into a three-dimensional, narrative subject. This means staging is a dialogue between object, content, space and recipient along a dramaturgical arc of suspence according to a spatial choreography or choreographed order of perception. The ‚Diamond of Suspense‘ reflects the context and relation between the main forces, which interact in a staged setting. ©URB

» FORM FOLLOWS CONTENT IS MY DESIGN PHILOSOPHY AND THE LEADING PRINCIPLE FOR ALL OUR PROJECTS. « ©URB

The Content represents the overall narrative, the storytelling, the plot and the message. Accordingly the design should support a consistent spatial staging to provide better access and understanding for the audience.

„FORM FOLLOWS CONTENT“ is the guiding principle of STUDIO UWE BRUECKNER, derived from Louis Sullivan’s maxim „Form follows function.“ In his most famous essay, „The Tall Office Building Artistically Considered“ (1896), Sullivan uses this dictum to describe his opinion that the outside shape of a building must follow the functions inside or, to put it another way, that form is derived from its function. „Form follows content“ should be understood as a transformation on a second level. It goes beyond the maxim that design is derived from its functionality in that it translates ideas, content, and messages into form, giving them not only form but also attitude and significance in the process. It is an interpretation of content with design means and a translation of the non-physical into a walk-in, three-dimensional space. It is in this tradition of taking form and giving form to content that the work of STUDIO UWE BRUECKNER is rooted.

» FROM THING TO OBJECT, FROM OBJECT TO EXHIBIT, FROM THE REAL THING TO ITS ABSTRACT SIGNIFICANCE. IF YOU TREAT THE OBJECT LIKE A SUBJECT, YOU WILL GET BEHIND ITS HIDDEN CHARACTER. GOOD SCENOGRAPHY (RE)-CONTEXTUALISES AND MAKES THINGS TALK. « ©URB 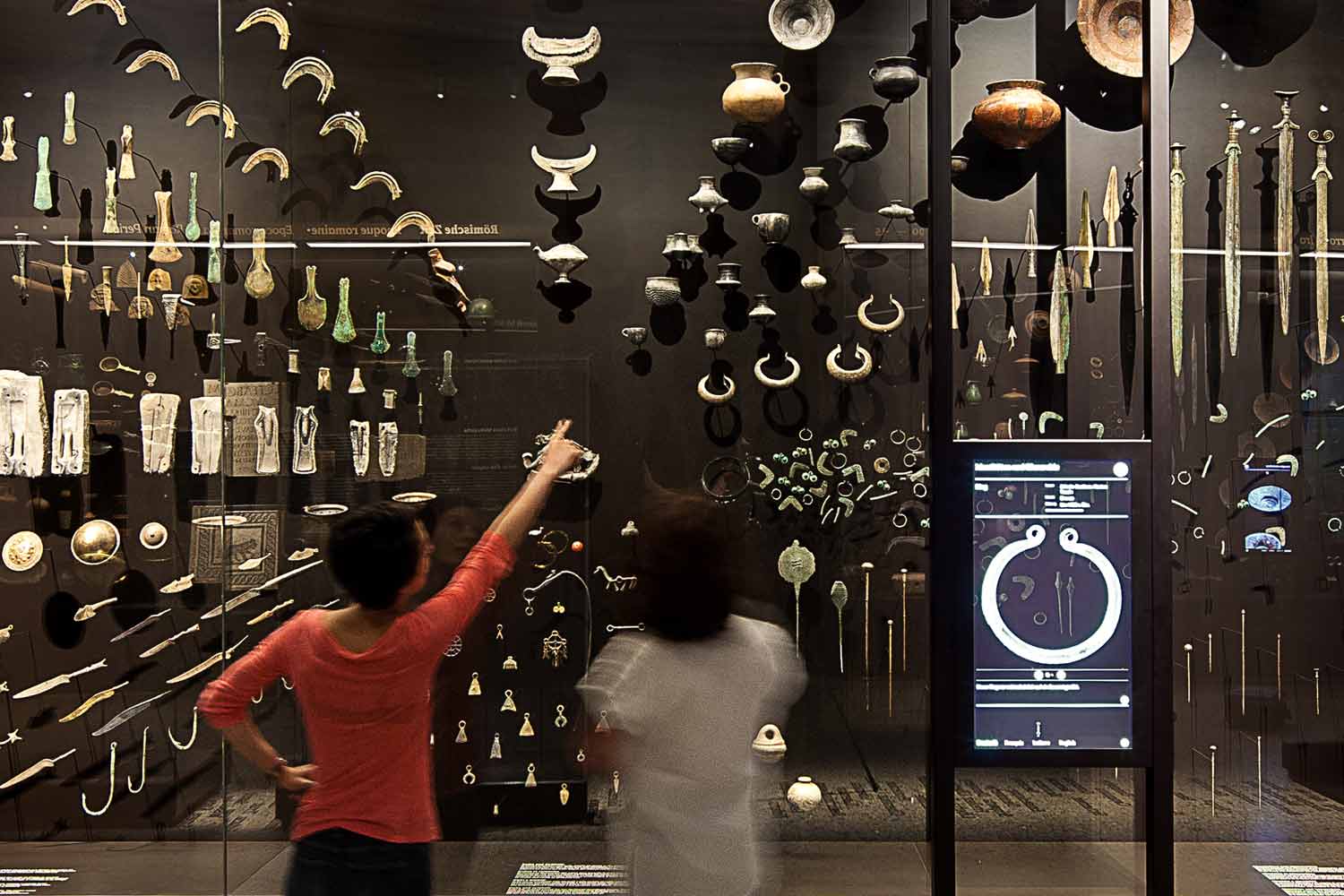 THE OBJECT is thing, deposit, and exhibit; it is the third parameter of scenography. It represents the source, the authentic thing, the bearer of meanings and the storyteller. The museum is a medium that, on the one hand, collects and preserves things in its repository as historical testimony and, on the other, exhibits and interprets them for the public in its exhibition space. Due to the relationship between depositing and exhibiting, the things of a museum are “agents of meaning formation that have been kept available.” They are witnesses, which mediate between the past and present, but they are also mediators between the visible and the invisible, between the materiality of the viewable and the immateriality of the memorable. As “epistemic things,” they are removed from their original, living context, robbed of their actual function and significance and then, in the context of the museum, recharged with significance. This change in context and the transfer of significance allow a surprising change of perspective and promise new insights. Anyone involved in exhibiting is conscious of the fragmentary transfer of a thing and takes into account that things that are not self-explanatory need a recontextualisation in the museum.

» NEVER WORK AGAINST THE ARCHITECTURE – ADOPT THE SPACE AND PLAY IT LIKE AN INSTRUMENT. « ©URB 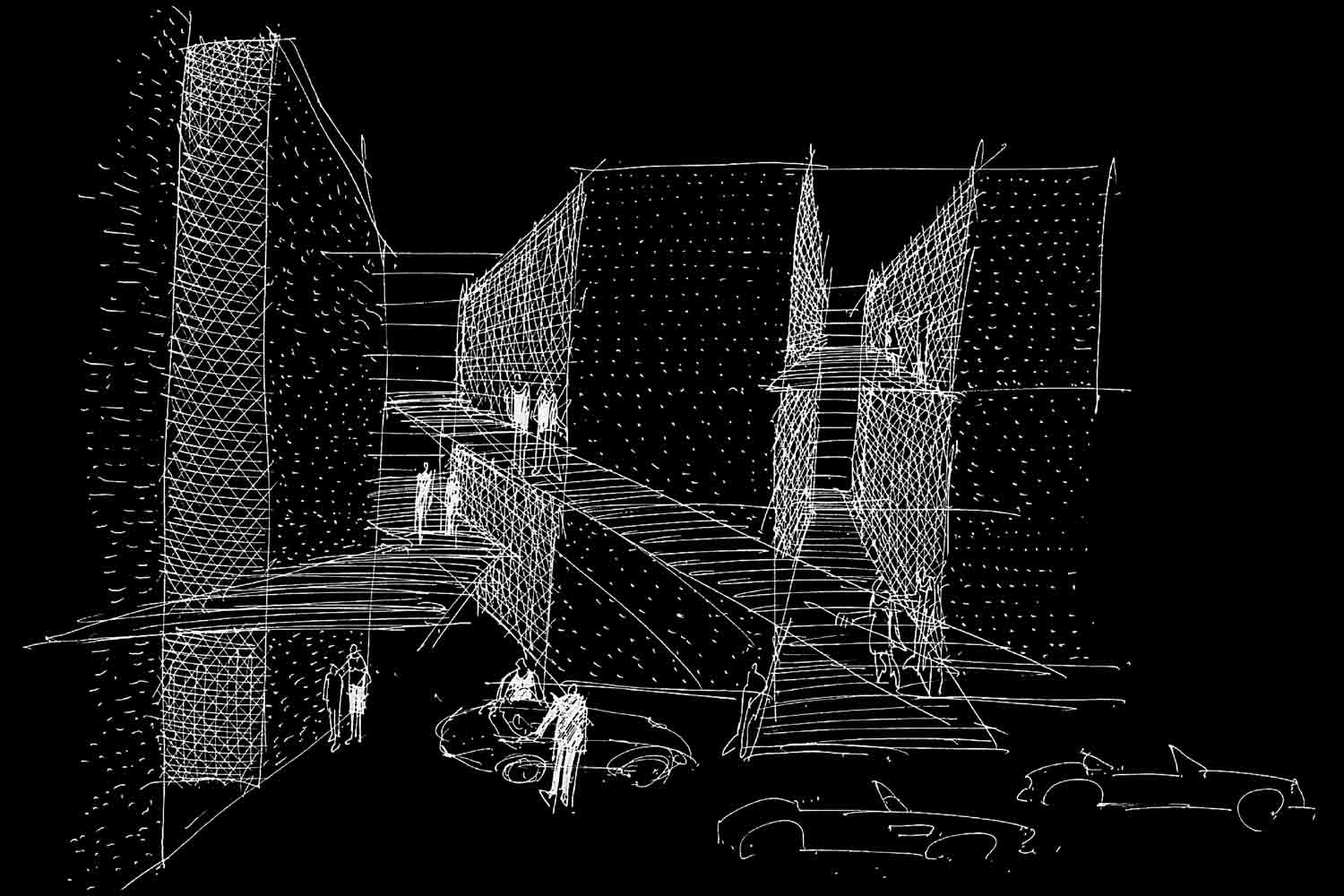 THE SPACE, with its potential for stage setting and narrative, is one of the foremost design parameters of scenography and serves as its central medium. Every space has its own language and its own message; it has a wide range of jargon, styles, and subjects. The space is environment, place, and stage; it can exclude, include, and frame and it can inform, convince, or deceive. Space is a place that endows meaning like a stage set in the theatre, on which interpretation and imagination enter a relationship. Staging a space also means the transformation of content and narration into atmosphere and emotion and the conversion of space in time. The staged space can have different dimensions and states of aggregation—including architectural, media-related, sculptural, and performative. It is a space for thought, a space for associations, a temporal space, a space for movement, an art space, an illusion space, an imagination space, an exploratory and narrative space. ©ATB|URB

THE RECIPIENT AS A PARAMETER

» THE VISITOR IS THE ANARCHISTIC ELEMENT IN THE EXHIBITION: NEVER FORESEEABLE, HARD TO GAUGE, RATHER A SOCIAL PROJECTION SURFACE WITH UNCERTAIN RECEPTIVE BEHAVIOUR. « ©URB

The recipients are the main addressees. They are spectator, listener and participant – his or her perception stands in relation to object, content, space, scenography and dramaturgy. 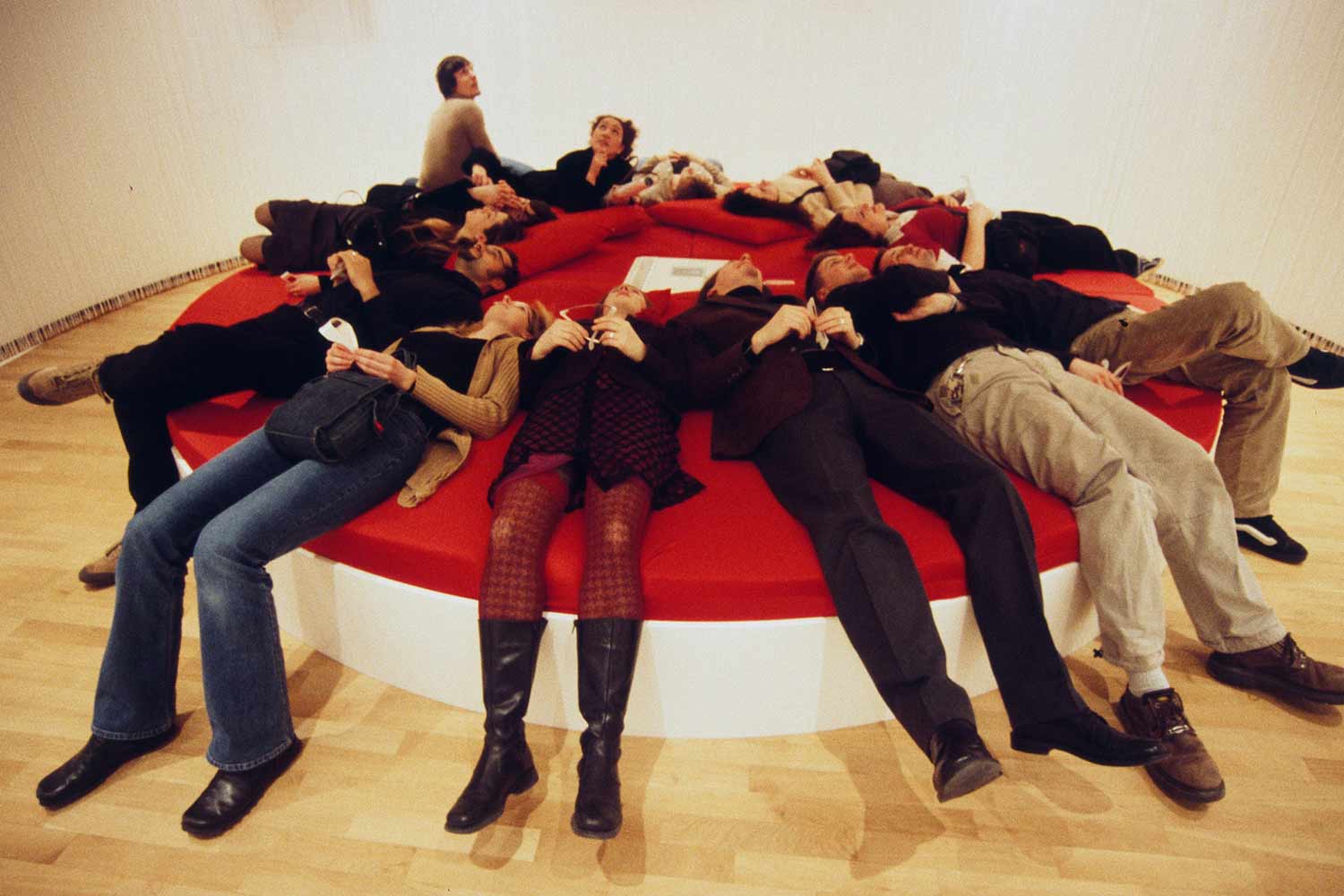 THE RECIPIENT, and his perception play a central role in the contemporary understanding of scenography. Staged settings always have an “information-conveying and/or referencing function” and exert a major impact on the meaning-assigning processes that take place in exhibitions. This not only concerns the (re-)contextualisation of objects and the presentation of complex contents and the design of narrative spaces, but also the involvement of the recipient in communication in the museum. In the 1970s the linear and unilateral model of communication—from the curator to the recipient via the object—was replaced by a new model and since then has been understood as a “dialogue-based relationship.” The visitor is no longer a passive recipient, but rather actively takes part in the process of assigning meaning.

The Dramaturgy represent the guiding thread through the exhibition and structure the visitors experience along the curve of suspence. 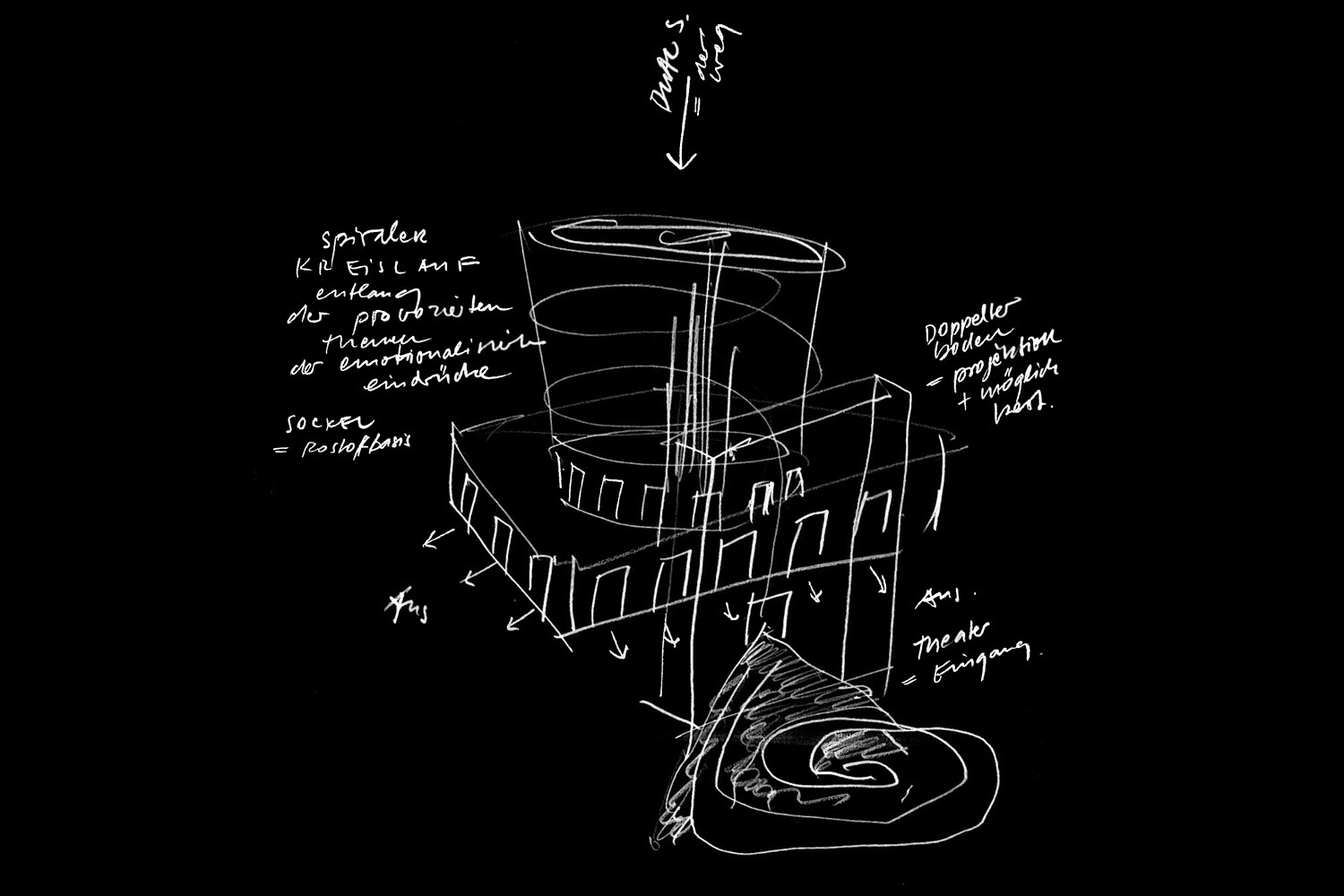 DRAMATURGY Scenographic design is a stage-setting act with its own DRAMATURGY The term “dramaturgy” stems originally from theatre and is derived from the Greek “dramatourgia.” Dramaturgy is the theory of the external construction and the laws governing the inner structure of the drama. But it is also the art of telling good stories in staged spaces. The staging is defined by various elements such as space, stage set, actors, text, language, light, sound, costumes, and audienceelements each with their own, in some cases opposed, arc of suspense.

As the staging of various social areas advanced, the term “dramaturgy” also found its way into these areas and has proved invaluable in arts such as film, dance, music, and audio drama. Dramaturgy has also found its way into exhibition design; indeed, it has become one of the five central parameters of scenography that underpin our design philosophy. It determines the chronology of the content, the exhibits, and the reception; it defines the sequence of rooms and is manifested in the exhibition routing.

Scenography integrates and makes use of five fundamental design parameters: content, object, space, recipient and dramaturgy. They form the basis of and the starting point for any development of holistic concepts and designs. The aim is to bring them together in a meaningful relationship and translate them into a three-dimensional, narrative subject. This means staging is a dialogue between object, content, space and recipient along a dramaturgical arc of suspence according to a spatial choreography or choreographed order of perception. The ‚Diamond of Suspense‘ reflects the context and relation between the main forces, which interact in a staged setting.

»GOOD SCENOGRAPHY IS START THINKING FROM THE END, FIRST.« ©URB